Innovations in the Race to Recharge Our Aquifers

After several years of drought, Santa Cruz County residents have welcomed the deluges provided by the seemingly never-ending train of so-called atmospheric river storms rolling off of the pacific storms this past January. While the rain has certainly been welcome, some of the rainfall intensities as well as the sheer volume of precipitation have led to negative impacts. It’s hard to drive across the County without encountering numerous landslides and slip outs, potholes have become ubiquitous, and unfortunately some residents and agricultural lands have been inundated by flood waters. 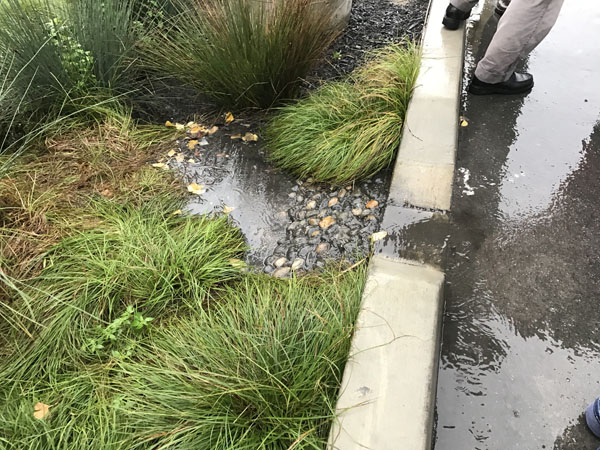 The City of Santa Cruz retrofitted a downtown public lot to direct runoff to a newly constructed bioretention area.In the coming years and decades we will likely see more of these types of atmospheric river events. A recent study shows that while total precipitation in the San Francisco Bay area hasn’t changed much in 120 years, the rain is coming in shorter, but heavier, events. This cycle of boom and bust agrees with climate change models that predict by 2100, the County will expect fewer, but more intense, storms each year.

This trend will have a significant impact on water resources for the County. A unique feature of Santa Cruz County is that, in contrast to most of the rest of the state, the County relies on local supplies for domestic water. The majority of that supply is derived from underground aquifers that are in a state of overdraft. In addition to providing drinking water, local aquifers feed streams, lakes and wetlands that serve as critical habitat for a number of species, several of which are threatened or endangered. Unfortunately, more intense rainfall doesn’t translate automatically into more water for domestic supply or better habitat for sensitive species. When more water falls in shorter more intense storms less of a share of that water is able to percolate into the ground and a greater percentage of it runs off fast out to the Monterey Bay National Marine Sanctuary. This trend is exacerbated by the fact that over decades of development, we have paved over areas that once acted as recharge zones for our aquifers, preventing infiltration and causing a larger portion of rainfall to become runoff, which increases in-channel stream erosion that degrades aquatic habitat, among a number of impacts. While the drought may be over, we still face ongoing challenges to better manage our water resources.

One way to do that is to manage stormwater differently. No longer can we look at stormwater as a nuisance, rather we must see it as a resource to improve our water supply, reduce overdraft and enhance stream and riparian resources. Managed Aquifer Recharge (MAR) projects and Low Impact Development (LID) techniques should be an integral part of solving our water issues. There isn’t a clear distinction between MAR and LID, but LID generally refers to drainage improvements at the parcel scale through techniques such as disconnecting downspouts with rain gardens or cisterns and replacing impervious surfaces with vegetated options or pervious pavements and pavers. While LID improvements benefit water quality and drainage, they generally do not address recharge. In contrast, MAR projects seek to collect runoff and either infiltrate or inject runoff into underlying aquifers specifically for recharge benefit.

When incorporated into a development design, LID can reduce capital costs and ecological intrusiveness while providing a wider range of benefits than traditionally-engineered storm-water systems. Although these approaches have been in existence for decades, they have only become accepted best practice in recent years. Through funding from the State Water Resources Control Board and the State Coastal Conservancy, the Resource Conservation District of Santa Cruz County (RCD) collaborated with several local jurisdictions to prepare a guide to assist landowners in assessing opportunities for practical applications of LID around their homes and property. The RCD’s experienced staff can advise landowners on the use of water catchment, rain gardens, swales, pervious surfaces and other LID techniques. 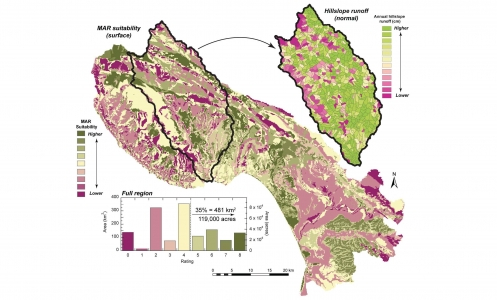 MAR suitability maps for Santa Cruz County. GIS files are availabe on the Resource Conservation District web site . MAR refers to the intentional recharge of water to suitable aquifers for subsequent recovery or to achieve environmental benefits. The scale of a MAR project can vary greatly – for example, in Orange County, CA a system designed to halt seawater intrusion injects up to 30 million gallons of treated wastewater per day. The scale of projects in Santa Cruz County will be much smaller, likely on the scale of capturing runoff from 200 – 500 acre catchment areas. The Bokariza MAR project in the Pajaro Valley in Santa Cruz County  receives stormwater runoff from surrounding farm fields and hill slopes, and has an estimated recharge capacity (amount of water back into the aquifer) of 80-100 AFY, based on infiltration and average precipitation rates (Fisher et al. 2011). Implementation of the Bokariza MAR project was the the result of a collaborative effort involving Driscoll’s Berry Associates and Reiter Affiliated Companies, the Resource Conservation District of Santa Cruz County, USDANRCS, researchers from the University of California at Santa Cruz (UCSC) and California State University Monterey Bay (CSUMB), and landowners. In order to effectively implement MAR, we need to know where the best opportunities are for recharge. With funding from the State Coastal Conservancy, the RCD partnered with Dr. Andy Fisher and a team at UCSC to gather data on soil types, geologic structure and groundwater elevation, among a number of other parameters, to produce maps that identify highly suitable areas for infiltration and recharge throughout Santa Cruz County. These maps, along with their associated GIS layers are all available for download from the RCD’s website. With this information, we will be looking to engage landowners in recharge areas and engineers working in these locations, to implement infiltration projects. One challenge with MAR is how to incentivize landowners to implement such projects. The RCD is also working with UCSC and Pajaro Valley Water Management Agency through the Recharge Net Metering (ReNeM) program that will rebate property owners a portion of their augmentation fees, based on the amount of enhanced infiltration on their property, as part of a MAR project.

The water resources challenges we face have been decades in the making. Those of us who live or work in Santa Cruz County have both the ability and the responsibility to address this challenge, and fortunately there are a number of tools and program through which this can be accomplished.